Few things are as common as furniture made from wood. Yet Mr Setlhare Jane, the National University of Lesotho (NUL) schooled innovator is redefining the very heart and soul of furniture.

Observe his TV stands and Tables and Vases, and you are immediately stricken by a thing or two. They combine strength with lightness, a rare and powerful combination, and they appear as whole entities without joints.

Their surface texture, enhanced by either waste maize stalks or waste roiboos tea, are on their own league.

“That is how me, and your average carpenter, differ.”

In the end, Jane ends up with more or less the same product, and many times better, for some applications.

This he does, not only by making the furniture out of waste cardboards and newspapers, but by doing so in his own unique way, using a unique binder and coat he developed.

He may as well be turning the entire furniture industry up-side-down and you will know why.

So let’s take a brief journey into why this furniture is such a big deal.

(Apply here for NUL EXPO to be held at Pioneer Mall in 23-26 January 2018: http://www.nulistice.org.ls/expo-and-exhibition stalls are free for NUL students and graduates)

It uses the principles of corrugation. It may sounds a big word but it is not that big. We use it everyday when we refer to corrugated iron. Yes, that metal sheet you use to roof your house.

Have you have ever wondered why metal roofs are not just plain sheets? It is because corrugation makes them far stronger and more durable than you think.

That up-and-down thing on your roofing sheets, according to Jane, is not a decoration; there is a lot of science behind it.

Cardbards contain corrugated papers already, actually cardboards often have three layers of papers, two plain, and one corrugated. The corrugated one is often sandwiched between the two that are plain.

“That corrugated paper in between, gives the cardboard its exceptional strength compared to your normal paper,” Jane said.

“I take advantage of the corrugation by putting multiple layers of my cardboard on their edges facing the direction of application of force from anything placed on my furniture and that gives my products amazing strength and durability.”

That he does after corrugating the corrugated as he puts it, “whenever possible, I take the already corrugated materials and corrugate them again to enhance the strength.”

Then he turns to the idea of composites. A composite material is the secret of modern aviation. In the past, airplanes were rich in light metals such as aluminium. Now almost all of them are made from composite materials in their bodies.

“These are materials which combine the strength of fibres with the lightness of polymers,” Jane said. It turns out a combination of lightness and strength is not only revered in aviation, it is important in furniture as well.

Cardboards, like all paper, he said, are nothing more than a bundle of natural fibers. Combine those fibres with carefully selected polymers and you have light but strong composites.

But the picture is not complete yet.

He makes a liberal use of newspaper to turn his products into wholesome entities without apparent appearance of joints common in most furniture products. At a glance, Jane’s products appear as if holes were just bored through one giant wood.

But the real genius is in how he perfects his material on the surface.

“At this point, I separate my products from your average furniture, and from any product made by using some of the principles and materials I am using.”

That separation lies in the final mixture he has developed over the past three years at the NUL. This mixture is more than just a coat.

“It actual turns a fragile paper material into a wood-like structure,” he said even as his eyes lights up because he is certainly convinced that he has nailed something which nobody has nailed before.

This mixture, he said, in its semi-liquid form, partly penetrates the very fabric of the paper and, in the end, ultimately hardens and sets to take the strength of bones, transforming part of the paper into something else.

To mimic the surface texture of natural wood, he adds a bit of ground maize stalks or used rooiboos tea to his mixture. And from that point onwards, the products adopt the voice of their own.

They speak for themselves. 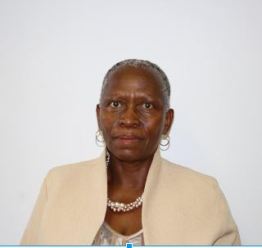