Two National University of Lesotho (NUL) Humanities lecturers, Mr Mape Mohlomi and Professor Tšepiso Rantšo, are creating a new brand of music that borrows from Afro-Jazz and other African sounds with a mix of Sekhankula. “The result is a new unique brand of music that sends you to the seventh heaven,” remarked one enthusiast.

[Listen to some of the songs here:

Welcome to the world of “Rantšo le Mohlomi.” In there, you will be enthralled by the likes of “Bophelo bo joalo,” a mesmerizing voiceless song about Covid-19, “Bothoto ke lefa…la ba bohlale,” which profiles the realities of how some people have normalised cheating and stealing from others in all areas of life, and “Shapa tsotsi…e mathe lebelo.”

We are used to all shades of African music. We know Afro-Jazz and we know the apparently dying Sekhankula music that, in its purest form, used to entertain Basotho through much of the 20th century. What we haven’t heard, at least at this level, is the modern mix of established African sounds with a more traditional music like the Sekhankula music.

So today, “Rantšo le Mohlomi” album is bringing you exactly that.

“I have been in music for quite some time,” said Mr Mape as he introduces his new album. Of course we have covered the story of his music journey on this platform before. “However, when people listened to my music, they have often confused it with the music of such legends as Tšepo Tšola, Oliver Mtukudzi, Bhudaza Mapefane and so on.”

“I want to reach a point where just hearing the sounds will lead to a name, Mape, not the artists that came before me.”

[Be part of Milco, Lesotho’s first chain-store that will sell ONLY Lesotho products by joining this WhatsApp group for more details: https://chat.whatsapp.com/DgkW6F9nHyzKhJbEHBknp1

Mr Mape said he had to think of new sounds, based on old Lesotho traditional music, that could be fused with the current popular African sounds. He went searching. “I could locate only one person left in Lesotho who could play “Setolotolo.” I could also locate more than five who still played “Lesiba”. Here I mean people who were really skilled in this old Basotho instruments.”

Once in time, fate would see him in Professor Rantšo’s office. He saw the picture on the wall in which the then young Mr Rantšo was holding Senkhakula beside a white lady (see the pictures). The message was clear. Professor Rantšo knew a thing or two about Sekhankula.

He would later found Professor knew a lot, actually, he lived the music.

The two colleagues were then thrown into a search for Sekhankula to see if the proposed “collabo” would work.

“I played Sekhankula even before I went to primary school, following on the footsteps of my brothers,” introduced Professor Rantšo whose love and mastery of this deeply tradition music seems to be at odds with his status as a Professor at the University.

Of course, he doesn’t mind killing such outdated perceptions.

“Despite me and my friends practising Sekhankula for years, only when I was in standard 7 was I successful enough to create a music out of it. Most of my peers never lived to do it. They all gave up.”

The lesson? “It may look simple but Sekhankula instrument is one of the hardest to master.”

It needs patience, it needs passion, it needs time. “If you don’t have a combination of the three you won’t make it,” he said.

When he finished high school, he herded sheep and cattle for two years before making it to NUL. That was the time he honed his Sekhankula skills to the maximum. He came out of with a few lessons.

First, those who took care of sheep or, more conveniently, goats, were able to master Sekhankula better. That is because, heading those don’t keep you as busy as when you head cattle which need constant attention, “that is why cattle herders often preferred “Lesiba,” which they could even hold with one hand while the other took care of the animals.”

Second, the Sekhankula music mastery starts with the assembly of the instrument itself. The tin has to be of the right size and it has to be put through fire to produce good sounds. The tin openings have to be just right not too big, not too small. The stick has to be the right thickness and the right length. You will also need to make a careful search for horse tail hair. It is long enough to make a good instrument.

Theory aside, Mr Mape first bought an existing Sekhankula which fell short. Professor Rantšo later scanned the scrapyards to find proper materials with which he created two brand new Sekhankula instruments. They then sat down and experimented and experimented.

The result of the fateful encounter in 2019 in the professor’s office gave us a transformative album in the name of “Bothoto ke lefa.”

The two academics believe that more needs to be done to document, preserve and recreate old kinds of Basotho music and musical instruments. “We hope that one day NUL will create NUL Department of Music for such purposes and more,” they said. 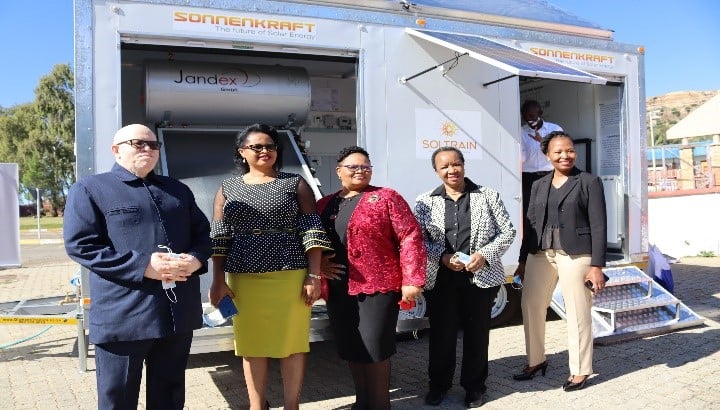 IT IS NOT THE DESTINATION BUT THE JOURNEY THAT MATTERS…YES, THE ENERGY RESEARCH CENTER (ERC) KEEPS DOING IT AGAIN AND AGAIN!